I have a shoe problem.  I am well aware of this, with sections of my house now essentially dedicated to housing a variety of shoes.  Many I haven’t worn for a long, long time.  However I am blessed with the ability to delude myself into thinking I will definately wear the next pair more than any others, no matter how impractical the heel or style of them.

That said, I recently stumbled across these fantastic Iron Fist shoes over at online department store Very.  They are £90, which is a price sadly out of my reach, but just look at them. 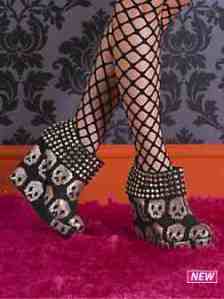 I’m a big fan of pretty much anything with skulls on, but I think these are my current favourite item.  The little gold skulls make them very different to any other shoes I’ve found.  If you find these kind of things on a regular basis let me know where and how I can get a room at a reasonable price.  At a fairly ridiculous heel of 4.5 inches there is almost no way I could walk comfortably in them, but sometimes they’re nice to look at on a bad day.  As a compromise, I may invest in some Iron Fist Zombie Stomper flats instead.

The next blog post should be on Friday, if I can get this Internet dongle to do anything at all for any longer than 5 minutes at that point.  I’ve finally had to admit that I’m an Internet addict.

For the second Merchandise Monday I’ve gone a little cheaper than last week’s cool but pricey Exorcist-themed entry.  Despite the drop in price, this is still a nifty little horror item: 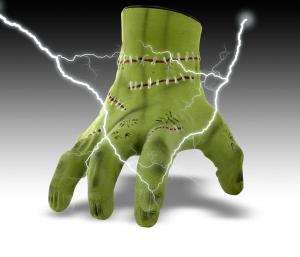 Who wouldn’t love a Frankenstein-style hand to wander around the house?  It’s good for frightening unwanted relatives, exercising pets or just chilling out with some Boris Karloff films.  It’s currently available from the wonderful I Want One Of Those for the reasonable price of £13.99 – link here.  Remember, nothing says I love you like a disembodied robotic hand.

My new review of 2008 film Martyrs is now up over at the Altered Realities Radio site.  Check it out and while you’re there check out the other reviews.  You’ll never need another horror review site.

Every Monday on the blog I’m going to try and feature a piece of horror merchandise that people may be interested in.  I’m always fascinated by the kind of merchandise that comes from horror films and it seems like horror fans are some of the most dedicated collectors around.

The first Merchandise Monday concerns one of my favourite films (in and out of the horror genre) The Exorcist.  My first viewing of The Exorcist came at a time when I was far too young, courtesy of some giggly teenage babysitters turning on the film halfway through Regan’s exorcism.  The image of Regan’s face out of context was utterly terrifying to my young mind and I’ve never forgotten that strange feeling that swept over me upon seeing it.  The only other time I had felt so frightened by something was when my dad allowed me to stay up watching Strange But True and a story about a tiny skeleton (it doesn’t sound so threatening now) kept me in nightmares for weeks.  I believe the night I saw Regan was enough that my mam never got someone to babysit me again.

Fast forward a few years and I was considerably less sensitive, having taken an interest in child-orientated horror things like Goosebumps and SpineChiller magazine, but was beginning to outgrow them and take an interest in more adult horror.  In 2002, I saw The Exorcist for sale on VHS, billed as ‘The Version You’ve Never Seen’ and had to pick it up.  At 13 years old I sat down to watch it in the living room with all the lights off and it blew me away.  While I didn’t find it as scary as I did when I caught those fleeting moments of Regan years earlier, the film had a much bigger impact on me, becoming a firm favourite.  I even screened it at my 14th birthday house party to those who had been warned away from watching it in the past.

With that bit of background, this piece of merchandise makes much more sense.  I recently saw it in Swansea market and fell instantly in love with it.  Such a harmless object to come out of such a controversial film.  I give you….

The Regan Possessed action figure!  She comes in her own little bed and while you can’t quite see the detail from this photograph, her dressing gown is peppered with little green stains.  Surely this would make the perfect addition to any horror fans bedroom.

Forbidden Planet are currently advertising a Web Price of £26.99, but they are all sadly sold out.  However, they do have a ‘Notify Me’ box for anyone who simply has to own one at this link.  I’m finding it hard to resist myself.

Seems only right to put this up on here.  If you’re interested in reading horror reviews by me and some other much more talented and experienced writers head on over to http://www.alteredrealitiesradio.com

Welcome to Scared Sheepless.  This blog will mostly be an output for thoughts and feelings on horror film, television and other mediums.  My name is Caitlyn and I’m from a small village in South Wales and I’ve been a fan of horror for as long as I remember.   This is my first blog so hopefully any potential teething problems will be worked out sooner rather than later.

While I get to grips with this and get started, why not follow me on Twitter with the handle @caitd5.